Some new and old recoveries

During last few days I had few new recoveries.

One from Ingo Roesler in Frankfurt. It's BHG ringed in January 2010 on Jakusevec and found December 7th 2010. 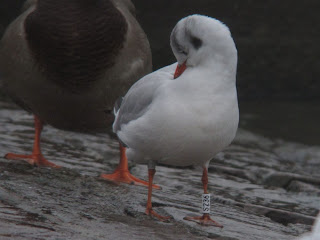 I got nice recovery few days ago from Wolfgang Schweighofer from Austria. His colleague Richard Katzinger read white S062. That BHG was ringed 20/12/2009 on Jakusevec, than found on 13/5/2010 in Lithuania on Panasupio rubbish dump and finally on 29/11/2010 in Wien in Austria.

I got ringing data for PUAC. It was ringed on 5/6/2010 in Kreminchukske vdskhstsh (reservoir), Cherkasi in Ukraine..

Unfortunately we will not go to Zadar rubbish tip this weekend but we'll be probably catching on Jakusevec again.. Not so bad:) maybe fuscus will come in the catching area...
Objavio Luka at 23:59