Today we finally started making new net for new cannons.. I had big netting that should be around 13 x 26m and planed to make 12x22m net out of it. The reality was a bit different :(

When we stretched the netting it wasn't looking that big.. After more than 7 hours of work we managed to make 17x9 net. It isn't that big but it looks huge to us :)  and we think it'll catch lots of gulls this winter and hopefully lots of other birds before winter... 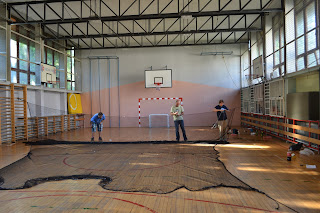 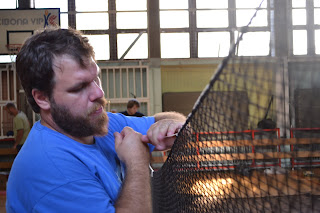 The day started very bad as we took 3 shoots with new cannons and still didn't manage to stretch the whole net :(

After that we went to ring some Common Tern chicks at one colony in Zagreb.. It was great!! In hour and twenty minutes Zec and I ringed 73 pulli!! Great number!! And didn't risk our life at any moment :)
Next year we have to start using colour rings for Common Terns! 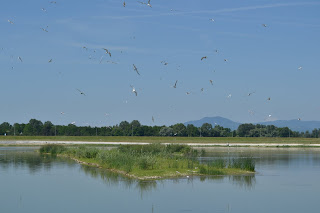 On the same island we found 6 Great Crested Grebe nest (still with eggs), Few dead YLGs and one dead BHG with white ring from Jakusevec from this winter..

On Friday we'll try to stretch the net with new cannons... again :(
Objavio Luka at 09:17 No comments:

The Day we swim across The Great Water

On Friday there was a plan for us to go on second round in Common Tern colony. Everything sounded great until Goran called me Thursday evening and said that we won't have a boat and we'll need to swim over to the colony. Zec, Vedran and I agreed that it won't be a problem.
We arrived at the scene around half past 8 and started making our way to the place where we took off. The river was not cold (around 20C) but it was very fast, much faster then we remember when we last time crossed it with a boat. Goran (who had kayak with one seat :)) told us that we should walk as far as we can and then jump in the river so that we have as little as possible to swim. Sounds logical, but the problem was that you couldn't stay at one place if the water is above your waist. Vedran was the first one to go.. Zec and I were waiting for few moments and than we started. At first it didn't seem that hard , but as the time was passing the place we wanted to end at the island was going really far from us. I could see the Vedran has reached the shallow water near the island so at one time I tried to get my feet to the ground but it was too deep..That was really bad because I relaxed a little so it was really hard to swim more.. At last we got across!! Finally!!
It was very nice weather, warm but with few clouds so the chicks and eggs were not threatened with either overheating or freezing. We decided to stay around 45 minutes. We managed to ring 35 new Common Tern chicks and 1 Little Ringed Plover. 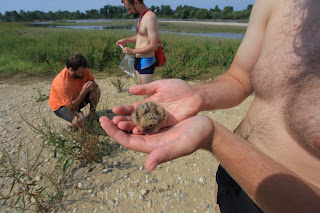 We found few Common Tern and few Little Tern nests. We also found few nest we are not sure of the parents and I would be grateful for any comments.


The time has come to go back! In the mean time the river is at least 20 cm higher... But we have to go back..
This time I was the first one to go.. I started swimming and first 30 m were ok.. Than I started to panic as the place where I thought I'll get out was going away... some 15 meters before the coast I was almost sure I'll miss the place :( Biggest problem is if I miss this I didn't know where will I get out... And you can not relax on the river as you can in the sea.. Then I managed to touch the ground some 10 meters from the coast :) I barely got the strength to get out.. To swim 60 m  of river we ended 150m lower then we started...

Here is one video clip to illustrate the strength and speed of the Great Water..

Hope we'll be back there in week or to to ring Little Terns..
Next week I we plan to visit one Common tern colony in Zagreb..
All of this photos and video of swimming were taken by Goran.
I forgot to mention that we tried our new cannons..They are fast like hell!! We have some things to try beore catching real birds :)
video of the first shoot with new cannons
Objavio Luka at 08:24 2 comments:

Today Zec, Sven and I meet with Goran Safarek to go and ring some Common Terns. Forecast was terribly wrong!! It should be dry in the morning and possible rain in the afternoon.. We came at 8:30 and it was raining..
We put the boat on the car and went to see if we'll be able to go to the colony... 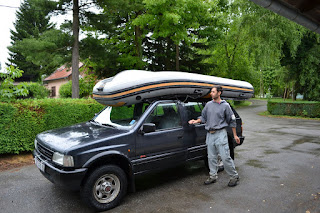 When we came to the place it was raining a bit so we decided to go to the colony. After rowing across the river we got to the islet with the colony. It was great! There were some 50 pairs of Common Terns, 10 pairs of Little Ringed Plovers, few Little Terns and Common Sandpiper. We started to look for the chicks and after some 15 minutes it started to rain harder so we decided to move from the colony :( we managed to ring 13 chicks.. We also found at least 20 nests with eggs so we'll probably get back in 10 days or so..
After we got back to the place we parked the car and took the boat from the river the sun started to shine :( 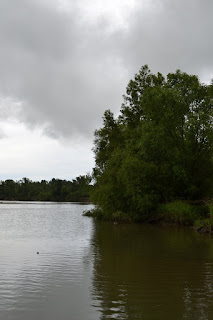 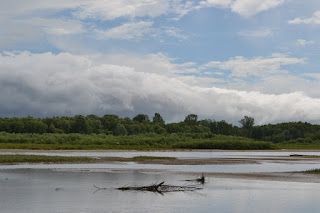 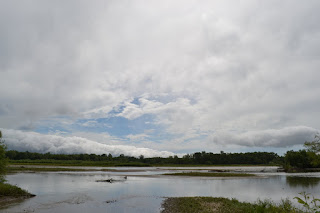 After returning the boat we went to have a drink and there was one Wood Pigeon all the time.. When we went to pay I was speaking with the waiter and he told me that it's nest is under the roof...So we ringed it:) New species ringed for me :) 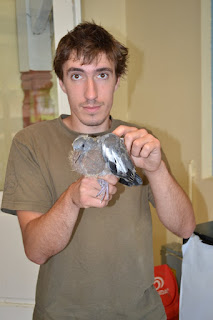 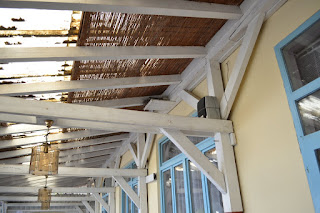