We are happy to announce the next International Gull Meeting that will take place in Zagreb, Croatia from Thursday 16th-Sunday 19th February 2012 and will be organized by BIOM – Association for Biological Research.
The meeting itself will take place at a few localities in Zagreb. Hopefully, we’ll all meet on Thursday afternoon (16.2.). Further, talks and registration of participants are planned to take place at the Division of Biology, Faculty of Science of the University of Zagreb. Talks are planned to be held during the whole Friday and on Saturday afternoon. On Saturday morning (18.2.) we plan a trip to the Jakuševec rubbish dump where we would see up to 20.000 gulls. Most of them will be Black-headed Gulls, but you will also see Common, Yellow-legged, Caspian, Herring, Lesser Black-backed, Great Black-backed Gulls and maybe some moreJ.  That’s going to be an opportunity to read lot’s of color and metal ring from all over Europe.  On the Saturday trip we’ll just watch gulls and on Sunday we plan to take a cannon netting session with those who are interested. Trips will start from Hotel Zagreb (http://www.hotelzagreb.com.hr/en/home ) where we found best prices for the participants. However, you are free to choose your own accommodation. We will provide you with a list of hotels upon request. Just across the street of hotel Zagreb is Lake Bundek located where you can see some gulls, swans and other waterfowl. The hotel is also in the vicinity of the rubbish dump, so we wouldn't lose much time for the trip(s).
During September we’ll send you details of the meeting with all the time tables and prices. Until then you can reach us at igm@biom.hr and all the new information about the meeting can be found on BIOM’s web site www.biom.hr.
At the end of this post you’ll find some questions that would really help us in calculations and writing the second announcement.
We are looking forward to hear from you and to see you in Zagreb next year!
All the best!
Luka Jurinović & the Croatian IGM team
PLEASE FILL AND SEND TO igm@biom.hr  before August 31st 2011
Name:
Email:
Post address:
Probability of participating =        %
Do you plan to have a talk?
If so, please give us the title and estimated duration of talk:
Do you want to participate in:
Saturday trip to the rubbish tip?
Sunday cannon netting session?
Any additional suggestions or comments are welcome and helpful!
Objavio Luka at 20:27 1 comment:

Last few days Ivana (aka Višnja), Vedran, Ivan and I spent on Lastovo looking to ring Yelkouan's and Scopoli's Shearwaters. The plan was to get to the biggest colony at first night and then in day time look on smaller colonies to see if there are enough youngsters to go and ring in the night when adults come to feed them.


Unfortunately, most of the Yelkouan's already fledged  and only few youngsters and adults were present at the colony :(
First night we managed to ring 19 Yelkouan's and 3 Scopoli's. We caught 1 Yelkouan and 1 Scopoly with our rings from last years(I'll put ringing data here when I get them ;)).
Most of the Yelkouans were young but some were very difficult to age.. 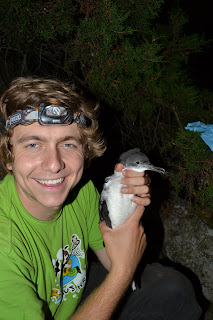 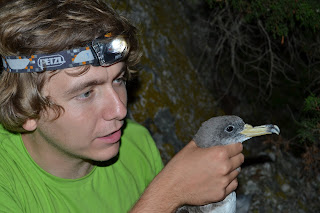 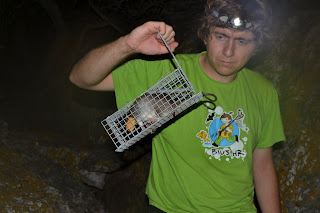 On last photo is holding a rat in a trap. It's part of active control of rat population on island with tubenoses colonies on it. Ivan started doing that this year in coordination with Lastovo Nature Park. This year there were much more Yelkouan chicks than last years because of it. Unfortunately we missed timing... It will be much more next year!

Next day Ivana and Ivan went to check other colonies.. All the youngsters were already left so we didn't even wisited it at night.. 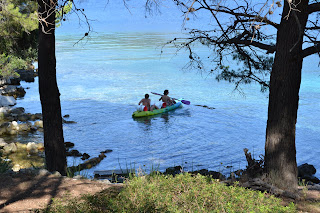 And in the end just wanted to put a photo of a camp we slept in. 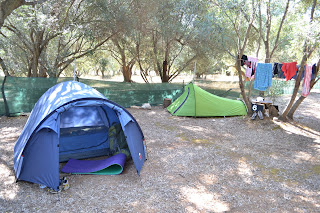 It's camp Skriveni near Skrivena Luka. Prices are very cheap and it's really nice! People are very friendly. We came at half past 4 from the colony first night and it was ok :) Also you can get dinner for 60kn (around 8Euros) with huge portion of fresh fish and home made wine. Very delicious! I was there for the first time and would like  recommend it!

One more photo for the end :