It was a promising day at Jakuševec, but.. 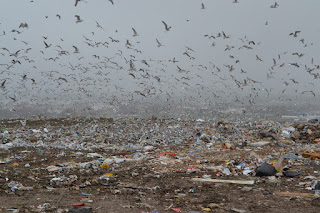 First zero catch...
After we set the net it looked as it will be very good day. There were many gulls in the air and around the compactor. On the spot where we put the net we got 2 loads of nice rubbish and it just looked perfect.. The compactor driver run over it , but gulls just didn't seem to be interested in this load.. After some time we got maybe 40-50 gulls in the catching area and I pressed the button but nothing happened :( The circuit was broken...It seems someone hooked one cannon's fuse and draw it out..

Then after the compactor did his driving in front of the net, million starlings landed in the catching area preventing us  to take even small catch.. After that it become very crowdy at the tip and we couldn't get the compactor driver to come again...

We really missed a bit of luck today :(

Yesterday I took the biggest ever cannon netting team in Croatia and the seven of us went to Jakuševec to start a cannon netting season with new net. It was pretty foggy and I was afraid if there will be any gulls on the tip. After some troubles with entrance, we managed to agree the place on the tip where we'll put the net. Funny thing was that the guy that was in charge of the tip put two truck loads to separate us from the rest of the tip and so that the other trucks wouldn't come there :) well done!

It took us some 45 minutes to set the net and then it was just a question if the compactor driver will do his part well.. 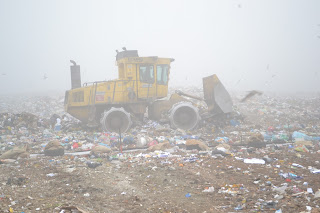 He did very good job! it looked like when I was in England with North Thames Gull Group. Zec and I were looking at the net. He was checking the safety zone and I was waiting for enough gulls and a window to put the net trough.. After a minute or so gulls started to land in front of the net. It looked very promising but somehow they didn't get concentrated enough so after some 10 minute we decided to take a catch. It was not so many gulls  :( but the net spread very very nice. It was around 40 gulls. When we extracted all the birds we started with ringing and taking samples. 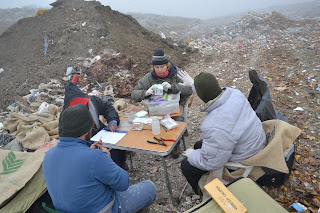 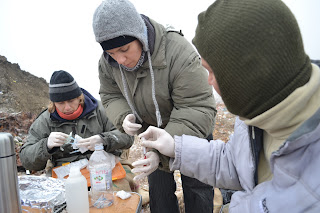 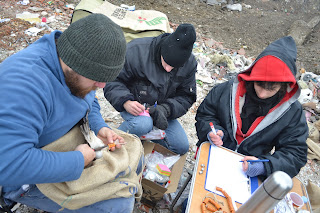 After an hour or so there were only few birds left so Vedran finished ringing and  Zec, Sven and I started setting the net for the second catch. The compactor driver was even better this time. It's unbelievable what they can do with that huge vehicle and how precise can they be! Second catch was around 50 birds with a dessert at the end an adult Caspian Gull. 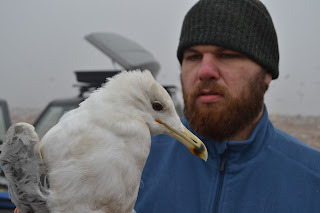 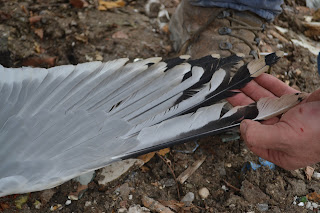 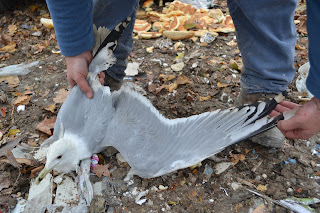 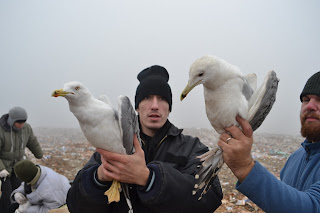 Caspian and Yellow-legged
The funny thing about this big net and working with compactor is that we got much more big gulls. Total score was 53 BHG, 28 YLG, 1 Caspian and 3 I'm not sure of the species (all comments are welcome).  I think we'll get much bigger catches in weeks to come. There are still only 2 or 3 thousands gulls on the rubbish tip and these numbers should grow very fast in near future and reach some 15000 which is normal for winter. I think the gulls will be much concentrated then.
We set the next catch for next Saturday. 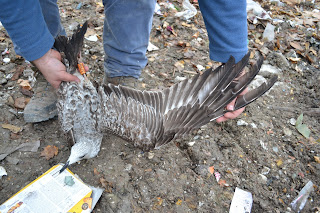 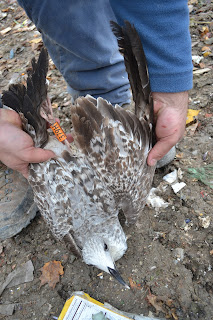 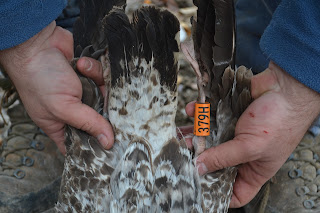 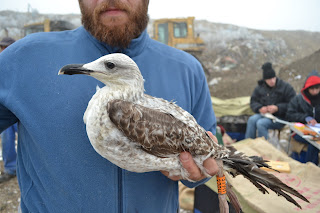 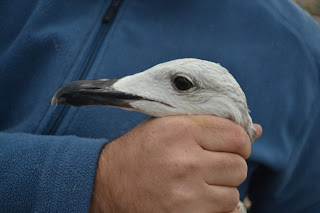 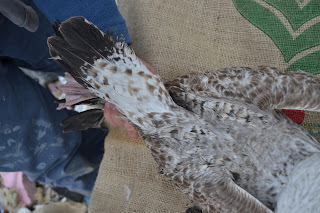 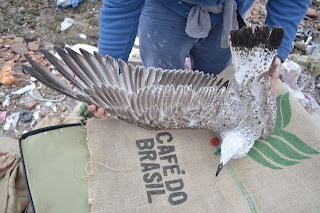 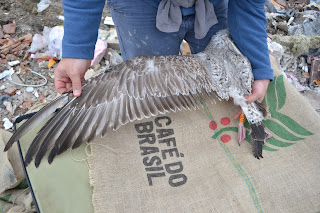 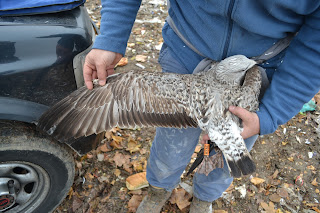 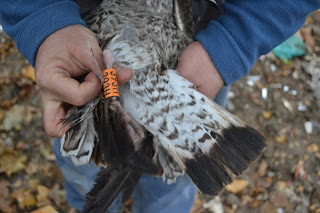 Friday and Saturday at Jakuševec

Yesterday I went to check on Jakuševec if the gulls have arrived and I was pleased to count almost 2000 of them.. More than 1500 of them were BHGs. There were at least 3 LBBG and first canus had arrived.. I managed to read more than 30 different rings on parking just outside of the rubbish tip :) Mostly Croatian michahellis but also 7 of our BHGs and one Hungarian BHG and one  Polish BHG (T91R Tomek :)) 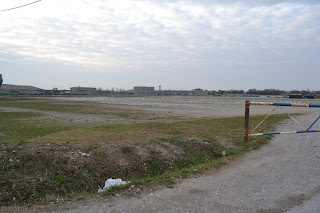 After the parking I went to the tip and spoke with guys there and had a deal to come today and try to catch on the tip and that they will help me with compactor and bulldozers.

Today we got on the tip just before 8 and there were already some gulls there. After a talk with a tip supervisor we were waiting for them to clear the place where we can put net.  There were only 3 of us so we decided to use the small (10x10) net. We set it up in some 20 minutes and waited for compactor driver.

He was very precise but wouldn't listen what I wanted him to do:( so after some 20 minutes we managed to take a catch. It was only 19 BHGs and 4 YLG.. 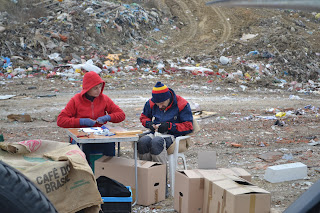 After ringing we set the net for the second shot but it didn't happen because we have some misunderstanding with the guy on the tip.. So we half satisfied went home and agreed the  next catch for 26th November and plan to have at least 8 people so that we can finally use the new net :)
Objavio Luka at 15:43 1 comment:

Last 7 days I got 26 recoveries of my BHGs. Most of them from Poland (9) and Austria (6). But there were new ones from Holland, Sweden and Lithuania. Here are some photos of Gulls found on zalew Witoszowka,Swidnica, Dolnoslaskie in Poland by Maciej Gajewski. 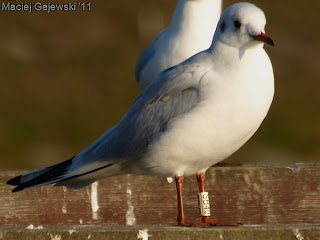 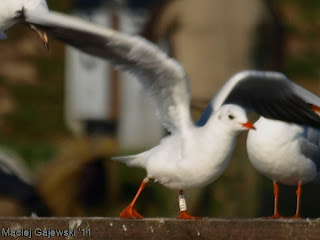 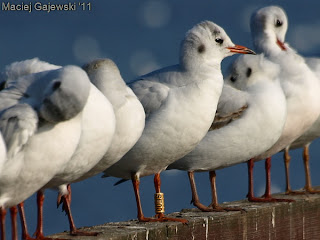 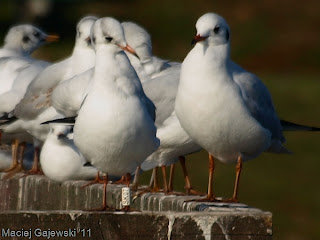 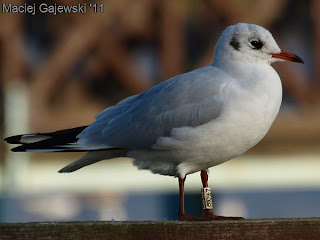 The highlight of the week was S103. It was ringed on Jakuševec on December 20th 2009. On October 29th 2011 it was in Simmering, wien, Austria and on November 5th 2011 in Malmo, Sweden. Not only it was fast but it was going in "wrong direction" :) There are lot's of things we will learn about BHGs...

Today I went to Jakuševec to check if there is enough gulls to start catching season..

There were less than 500 gulls so I decided to postpone it for a week or two.. 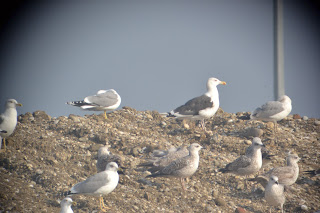 I managed to read 9 Croatian color ringed YLGs, 2 Croatian BHGs. But the star of the day was Caspian with yellow 2LZV. This one should be from Lithuania. 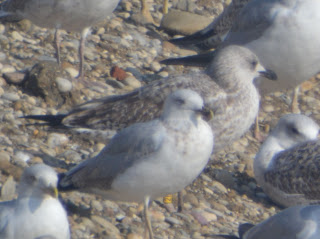 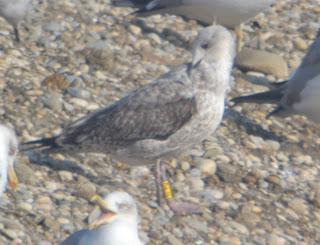 Remember the net we were netting in June?
Today we finally fired it :)
It was great! We managed to stretch it really nice.
Only problem is that I think we won't be able to make a catch with only 4 people..


You can see it here

On Friday I'm going to check if there are enough gulls on Jakuševec and maybe we'll open the season On Saturday:)

We must practice so that we catch many gulls in February when we'll have guest at our rubbish tip.
Objavio Luka at 12:17 No comments: