Sunday started perfectly.. Very cold (although only -2) and dense fog.  Everything was set at 8:00 so we expect that we'll have first catch at 8:05 but gulls had other plans.. They were flaying around( we could hear them) but didn't landed until 10:00(!!!!) We were a bit frozen, but adrenalin warmed us up when they start landing on tip. First catch was few minutes after. Some 50 birds.. Immediately after we set up the net again and some 5 minutes later we had 50 more birds. Last catch was at noon.
All in all:

Last week we started using  INTERREX double loop rings for BHGs and I must say they're really easy to put on and have big inscription so I think they'll produce lot's of recoveries :) 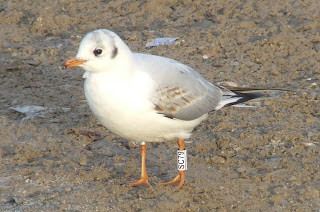 I managed to take photo of one of the fuscus on Sunday so I'd be grateful for any comments on subspecies. 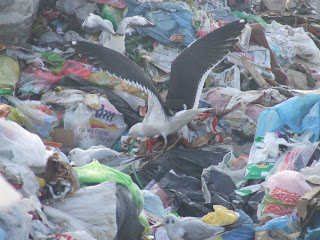 This one looks like Baltic because of shade of black (no contrast between primaries and rest of the wing)   and only small white dot on P1 but it's much bigger (fatter) than birds that pass here in spring..

And just when i thought that this day is over, I got e-mail from Wolfgang with our first recovery of BHG ringed Last Sunday and found yesterday in Wien :) 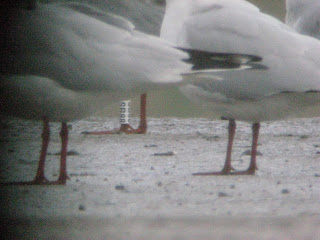