Yesterday I was really surprised when I got e-mail from Foued Hamza telling me he found one of the BHGs I ringed :) It wouldn't be that fun if it wasn't on other continent:) It was S994 and he found it in Gulf of Gabes in Tunisia!!! The bird was ringed on Jakuševec December 13th 2009 and it is it's first recovery. 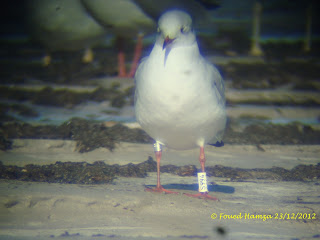 I was hoping for some times now that some of the guys who are looking for LBBG in N Africa will find some of my birds and the day has finally come! Now it's time for Asia and America:)

Merry Xmas everybody!
Objavio Luka at 21:17